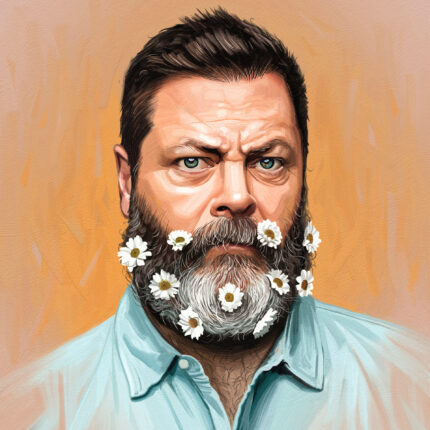 We’re all part of the same bag of molecules. If you care about anything—like your family, your community, or your ecosystem—then we should try our best to treat it all with equal affection. – Nick Offerman, episode 248 of Talk Easy with Sam Fragoso

Actor, author, and woodworker Nick Offerman joins us in the studio! We begin with his new book, Where the Deer and the Antelope Play: The Pastoral Observations of One Ignorant American Who Loves to Walk Outside (5:05), which was inspired by Nick’s upbringing in rural Minooka, Illinois (6:12), the writings of poet Wendell Berry (7:30), and his experiences with the late Sam Shepard at Steppenwolf Theatre (8:08).

Shortly after working with Shepard, Offerman began to find his footing—on and off the stage—as a performer, carpenter, and fight choreographer (9:35). He reflects on his galvanizing role in the film Going All the Way (15:14), the guiding principles of George Saunders (20:00), lessons from his sensei Shōzō Satō (25:26), the start of his nearly two-decade marriage with actress Megan Mullally (26:30), the phone call that changed his life (35:50), and the complicated legacy of Ron Swanson from Parks and Recreation (41:45).