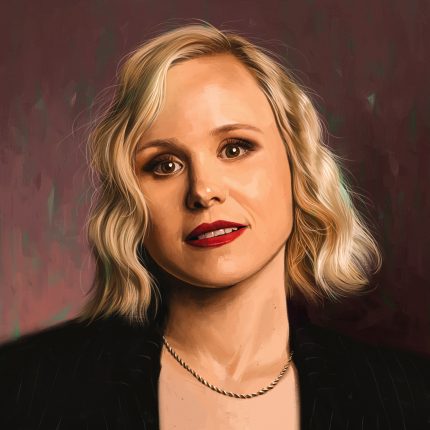 “The fragility of live stage is the most beautiful thing in the world. We all play pretend. It’s different than in movies because the people up there are real, and the people in the audience are real too, there is a back and forth, give and take. The forth wall is not a wall, it’s a group of people, it’s a population. And they can fuck up a show just as much as we can if they’re not in the right headspace. I think every stage actor will talk about a good audience or a bad audience, and it’s energetic, too. It’s just this fragile, beautiful thing you can mess up if you don’t believe.” – Alison Pill, episode 161 on Talk Easy with Sam Fragoso

If it weren’t for her singular acting abilities, Alison Pill would be best known for her boisterous laugh. (That is only kinda a joke.) The chameleonic actress–Scott Pilgrim vs. the World, Midnight in Paris, The Newsroom–has been at it since the age of 10. And so we begin on set, unpacking her life as a child actor, and how she managed to find a voice as she grew up on (and off) screen. We also discuss her transcendent work on stage (from Blackbird to Three Tall Women), rejecting precocity, the film that almost made her quit acting, the trials and tribulations of dating in your 20s, approaching #MeToo with a politics of grace, and why Thornton Wilder has irrevocably changed her life. There’s also laughing. Lots and lots of laughing.