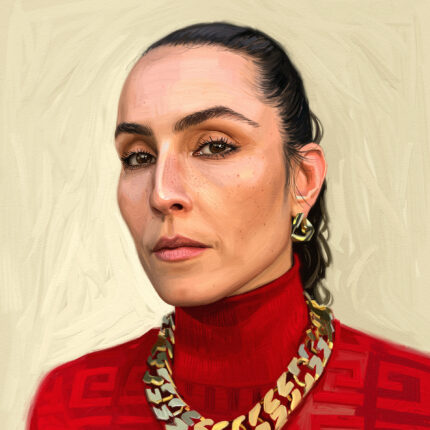 I created an identity for myself to be a person that always gives one hundred percent. I just can’t do less and I’m very stubborn. In every role, there’s a moment— there’s always one wall that I need to climb and some fear I need to confront in myself. Sometimes it’s physical, sometimes emotional or psychological. If I have a thing that’s like, “Oh that’s scary,” I need to go there.

Upon the release of her new film Lamb, we sit with actor Noomi Rapace. We begin with how she explained the project to her son (4:24), after two decades of fearless performances (6:18) ignited by her breakout role in The Girl With The Dragon Tattoo (17:24). As we reflect on the pandemic, she describes a feeling of stillness (20:09) that emerged after Lamb—a counter to the years of “running” during Prometheus, Sherlock Holmes, and The Drop (23:02). As we leave, we revisit an early interview clip (25:05), her realizations about motherhood (30:02), and what it means to listen more (34:36).