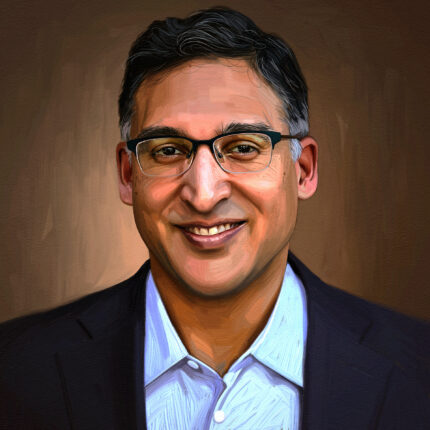 “Roe v. Wade is so important to the fabric of our society at this point, and social expectations have crystallized around it—that we can’t overrule it. We’re not at The Handmaid’s Tale yet, and it’s unthinkable to have something like that happen. We have to take it upon ourselves to bend the arc back toward justice.”

Last month, a leaked draft opinion offered a repudiation of a 1973 decision which guaranteed federal constitutional protections of abortion rights. The historic leak was followed by both pro-choice and pro-life protests across the country. By the time those fights were waged, a series of other human life tragedies took hold. First Buffalo, then Uvalde, then Tulsa, and then and then and then. The cumulative effect has produced a grief-stricken country, forever in mourning.

And yet, we are tasked with finding a way to move forward.

While we await the Supreme Court’s decision, attorney Neal Katyal has been fighting back. Formerly the Solicitor General under the Obama Administration, Katyal joins us to discuss the historic nature of Justice Samuel Alito’s draft opinion (4:18), the ‘super precedent’ that Roe v. Wade has set (6:24), and why the Constitution is designed to protect individual rights (9:45). We also look at the states that have begun restricting abortion (16:05) and their unnerving parallels to Margret Atwood’s The Handmaid’s Tale (20:23).

After the break, Neal outlines the aftermath of Alito’s draft opinion, should it come to pass: including other rights that could be in jeopardy (26:17), the erosion of public confidence in the courts (32:58), and a restrictive reimagining of the Judicial Branch (36:13). To end, Katyal reflects on a life in the courtroom and where he still finds hope—‘even in this darkest hour’ (44:29).